Neutrinos – fundamental particles which make up the universe

Neutrinos are one of the fundamental particles which make up the universe.They are also one of the particle which is least understood.

“Neutrinos” name, which means “little neutral one,” refers to the fact that they carry no electrical charge.

A neutrino is a subatomic particle that is similar to an electron but without any electrical charge and with very little mass, which may be even zero.

Though these particles are found in large quantities in the Universe, they are difficult to detect because they make little to no interactions with matter.

They are produced in large numbers during the nuclear reactions in stars and others.

Neutrinos are similar to the more familiar electron, with one crucial difference, i.e., neutrinos do not carry electric charge.

Neutrinos are electrically neutral, they are not affected by the electromagnetic forces which act on electrons.

Neutrinos are affected only by a “weak” sub-atomic force of much shorter range than electromagnetism, and are therefore able to pass through great distances in matter without being affected by it.

Countless neutrinos came into existence fractions of a second after the Big Bang.

And new neutrinos are created all the time: in the nuclear hearts of stars, in particle accelerators and atomic reactors on Earth, during the explosive collapse of supernovas and when radioactive elements decay.

This means that there are, on average, 1 billion times more neutrinos than protons in the universe.

Approximately 100 billion neutrinos are passing through every square centimeter of your body at this moment, though you won’t feel a thing. 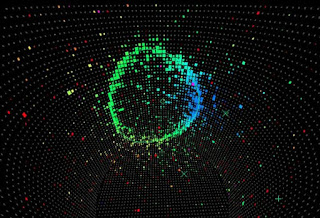 A new research has revealed that the geometry of space-time can cause neutrinos to oscillate.

“Oscillate” here means that different types of neutrinos change into one another.

Researching the oscillation of neutrinos is critical for understanding the origin of the Universe.

No Result
View All Result